When Should I Use an Ethernet Cable? 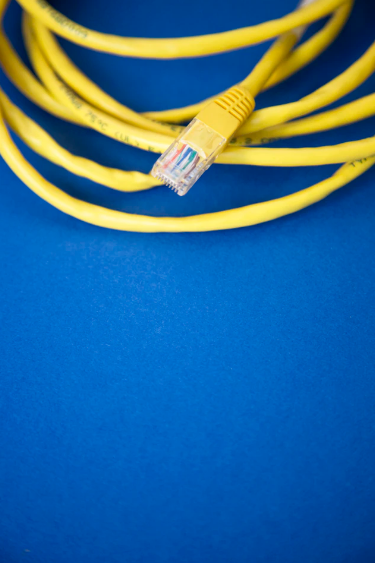 You know we love Wi-Fi (it’s probably pretty obvious how much) but there are occasions when there is actually a better way to connect to the internet… Shock horror! What is this blasphemy? Well, ethernet cables.

Picture a time before we had Wi-Fi (if you’re old enough). Fighting between the computer and the phone line, the sound of the modem dialling up, the plodding speed. Are you on that t’internet yet? (Peter Kay fans, that one’s for you).

We automatically just opt for Wi-Fi now and connect without being conscious of it. Connecting via cable is probably not something you would ever consider. We’re now in an age where we can connect to the internet pretty much anywhere in our house, stream HD video, play online games, the list goes on.

But what if the signal strength isn’t good enough for any of that? You might not realise it, but wired internet is still a thing, and there are situations when it might be better to go back to the old fashioned way. The fact is, that actually for just about anything a wired connection would be better – Sometimes very subtly, and other times radically.

Just because Wi-Fi has come along and revolutionised how we use the internet, doesn’t mean we have to use it all the time for everything. So here are some reasons why ethernet could be better than Wi-Fi.

So when should you use a cabled connection?

We said earlier about how it could be a very subtle difference – In which case it’s maybe not worth putting in cables. But in the more radically different cases where an ethernet cable could bring internet access to a dead zone or reduce latency during online gaming, a wired connection could just be your knight in shining armour.

For most, A Wi-Fi connection is perfectly suitable – browsing the web, scrolling social media, answering work emails, watching non-4K video streaming will likely be unaffected by the potential drawbacks of Wi-Fi.

For those streaming 4K videos (rather than the default 1080p), people who frequently need to download large files or those that play online video games, a wired connection should be a very real consideration.

In the online gaming scenario – Do you want to be the person ruining someone else’s gaming experience because of latency problems? A wired connection could drastically reduce this problem – And you wouldn’t be the only gamer happy about it!

A general rule of thumb would be to wire up devices that stay in one place. If they don’t need to move about, then there’s no reason not to wire them up. If it’s something that you move around a lot – Like a laptop – Then leave it connected to Wi-Fi.

You might be thinking it’s all very well us telling you to cable up more of your devices, but many of them don’t actually support that connection. Why?

Possibly because in general, Wi-Fi is good enough for the job. We all rely heavily on Wi-Fi and don’t tend to even think about a wired connection, so the market reflects that. But by only offering Wi-Fi compatible devices with no ethernet ports, they’re also dictating to us what we use.

There are devices you can buy relatively cheaply that you can use as adaptors, for example for streaming sticks, but if the Wi-Fi is good enough then why would you bother?

It also, like everything, comes down to money. Devices are easier and cheaper to manufacture if they’re just wireless enabled, rather than adding in additional ethernet ports that the majority of people likely wouldn’t think to use. This means the price of the product can also be cheaper, again making it the more popular choice in many cases. For example, the Amazon Fire Stick can be plugged straight into an HDMi port and you can be watching high-quality video streaming for less than fifty quid. An ethernet compatible alternative would be much more expensive.

The appeal to these little devices is also often their size, and as ethernet ports are rather big they don’t lend themselves well to streaming sticks.

You will however find ethernet compatibility with the Google Chromecast Ultra which is included by default.

Will 5G internet fix this problem?

There has been much hype about 5G internet and how it’s going to be a big step forward in mobile internet. The 5G revolution is starting, and wireless internet will be much, much faster than it already is.

However, it’s not properly here yet and it will take some time to be accessible everywhere. It’s going to take quite a bit of time before 5G is automatically the default, and even when it is, it doesn’t automatically mean the end for wired connections.

The issues with consistency and interference that we spoke about earlier could still be problems for 5G.

So in summary, there are certainly times when ethernet cables can be the best option and will work well, especially for stationary devices. But 9 times out of ten, people are going to choose wireless. ‘I’ll have one of them Wiffy’s! Two if they’re free!’*